Lync Server 2013 Publish Topology process fails with the error: “InstallDatabaseInternalFailure: An internal error has occurred while trying to create or update the database.”

You attempt to publish a new enterprise pool from Topology Builder but notice that it fails with the following: 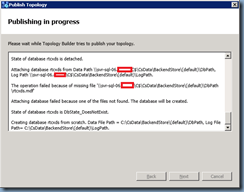 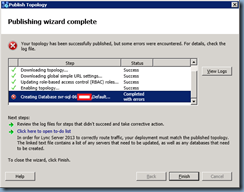 InstallDatabaseInternalFailure: An internal error has occurred while trying to create or update the database.

Error: Timeout expired. The timeout period elapsed prior to completion of the operation or the server is not responding.
▼ Details 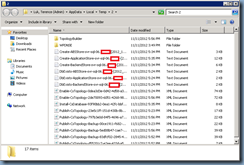 Since Lync Server 2013 has just recently RTM-ed, there wasn’t a whole lot of resources other than this forum post:

Unfortunately, my issue wasn’t because SQL Agent wasn’t started nor was it disk space.  What my issue ended up to be was a transient issue.  The time I was publishing the topology also had a weekend backup job going on so I had intermittent issues with slow network speeds across servers.  I’m sure that not many people would run into the same issue as me but I think what’s important to know is to not let this error throw you off thinking that there is something wrong with your Lync topology.  Proceed with ensuring that network connectivity is in good health then try to deploy the pool again because the topology published properly on the second try. 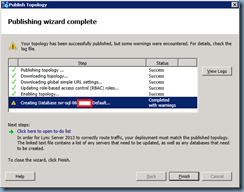 I hardened my CMS server by disabling admin shares and I failed while publishing. After changing the registry key to 1 finally published successfully.