I’ve been working on a project for a school that had limited budget this year for their infrastructure and was not able to upgrade their Microsoft DPM 2007 backup software to the latest version and since DPM 2007 does not support backing up the Exchange Server 2010 information stores, the only alternative solution for them was to use the build in Windows Server Backup application that is natively built into Windows Server 2008 R2.  The challenge of using Windows Server Backup was that you could only schedule one backup job from within the GUI and because I had to stagger the backup jobs to have them save the backups to different folders, what I needed to do was manually create backup jobs within Task Scheduler.

The first task was to figure out what the proper syntax was and since backup jobs in Windows Server Backup was essentially a task scheduled with the %windir%\System32\wbadmin.exe command, I simply looked up the switches available for the wbadmin.exe command.  Details and explanation for this command can be found here: http://technet.microsoft.com/en-us/library/cc754015(WS.10).aspx and all the switches to start a backup job can be found here: http://technet.microsoft.com/en-us/library/cc742083(WS.10).aspx.

As shown in the Parameters in the link above, the switches we’re interested are as follows:

The schedule I worked out was to backup the information store in different folders on \\backupServer\f$ for different days as shown in the following:

Note that this is just an example and the folders are set up as such because of the limited drive space I had. 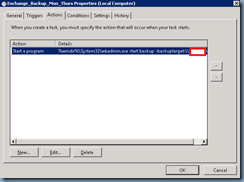 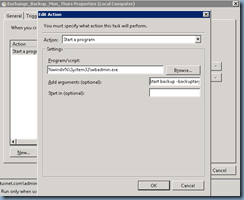 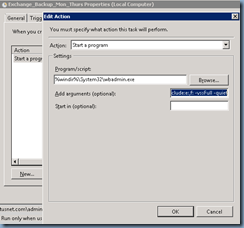 In my example, the e: and f: drives are my database and log drives and therefore was included into the parameters.  The -vssFull switch is important for Exchange 2010 backups so that the job can flush the logs so make sure you include it into the parameters.

Hope this helps anyone who needs a temporary backup solution for Exchange Server 2010 and/or in some cases, need to flush the logs for an Exchange 2010 server because the log drive has filled up and turning on circular logging is not an option.

How do you restore an older backup using this method?

When you click on Windows Backup and choose Recover, it only allows you to choose the last backup date and you can't restore from any of the other backup dates.