Recovering an Exchange 2010 Mailbox Server from a corrupted operating system

I had to recently redo an Exchange Server 2010 mailbox server’s operating system because the incorrect version was used to for the OS and in additional to this role, I also had to redo the server with the hub transport and CAS role as well.  More information about why can be found in the previous post so rather than reiterating the reasons, let’s get straight to the process.  The following example will be recovering a CAS server collocated with the hub transport server.

Note that you can find the following 2 TechNet articles is what I used for this operation:

Prepare the new server’s operating system – the first step is to either create a new virtual machine or reconfigure a physical server and install the Windows Server 2008 R2 operating system. 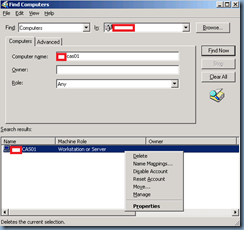 Join new Exchange 2010 CAS / Hub Transport server to the domain – If the new server is still in a workgroup, join it to the domain.

Prepare the new Exchange 2010 CAS / Hub Transport server’s roles and features – You can either manually install all of the prerequisites or use the script found here: http://terenceluk.blogspot.com/2010/07/exchange-2010-resource-domain-install.html.  Note that the Office Filter Pack found in the blog post is 1.0 and with Exchange Server 2010 SP1, you should install the Office Filter Pack 2.0 which can be downloaded from here:  http://go.microsoft.com/fwlink/?LinkID=191548.  The following is what the PowerShell script that installs the prerequisites look like: 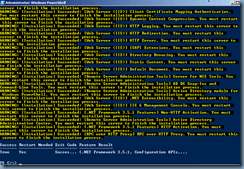 Export and import the public certificates – It’s important that you export an import the existing certificates you are using for your CAS server (i.e. OWA, Outlook Anywhere, ActiveSync, etc) into the new one.

Now that all of the prerequisites have been installed and configured, proceed with the following steps:

Open up a command prompt with administrator permissions to run setup – Recovering the Exchange Server 2010’s CAS and Hub Transport server is actually quite simple and the process is to simply execute the setup.exe executable from the installation binaries with the /m:RecoverServer switch as such:

Allow the recovery process to execute – Once you’ve ran setup.exe with the appropriate switch, you’ll see the setup go through the required prerequisite checks and then proceed to reinstall the hub transport and CAS role: 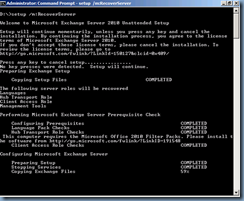 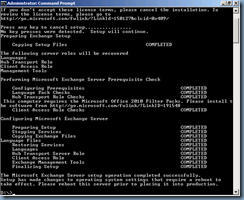 Reboot the server – Once the process completes, proceed with rebooting the server.

Check the services – Once the reboot of the server completes, proceed with checking the services and ensure that all of the automatic ones start up successfully.

Review event logs – Ensure that you review the new mailbox server’s event logs and make sure there are no unexpected errors logged.

Reconfigure OWA services – Recovering the CAS server will require certain additional configuration to be made as settings such as the logon format for OWA which is provided by IIS is not recovered: 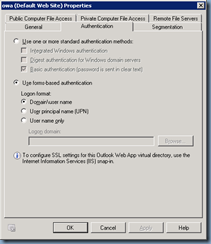 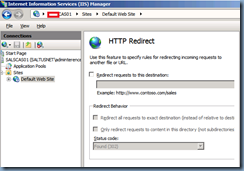 Hope this helps anyone who may be looking for more information about what the recovery process looks like.  I’ll be writing another hub transport and CAS server recovery after this post.

Very Helpfull this post, mi CAS crash and i could make a new one following this step, thanks.

Hi Terence but what about the GUID of the server. When i install new server will the guid change

Really Helpful this post but most of the commands can't be executed by a native user. Because they don't want to do all these things. They just want to access Exchange server without any disturbance. But as we know that in this world, nothing is perfect either that is software or any hardware. Everything wears out or damages with change of time.
Therefore like the same Exchange server also stops working sometimes cause of an issue like corrupted Exchange Mailboxes.
Therefore according to me, any third party tool will be good and handy in use for recovery of deleted emails from corrupted Exchange mailboxes.