The support engineer gave me a call back yesterday and said this is apparently a known issue at Microsoft and a patch is supposed to be released at some point.  He could not provide an exact ETA but said possibly in August 2018.

You’ve deployed a new Windows Server 2016 RDS environment and published RemoteApps but received complains that when a user’s session times out after the configured idle limit, they receive the following Windows and unable to click the OK button:

Session has been idle over its time limit.

It will be disconnected in 2 minutes.

The problem with the window above is that the RDS RemoteApp session has disconnected but the window indicating the end of the session is stuck behind this warning window. There is really nothing the user can do to get the window in the background to get on top of this one so they need to terminate the RDS session via the task bar.

One of the solutions that correct this issue is to disable the Use advanced RemoteFX graphics for RemoteApp configuration found: 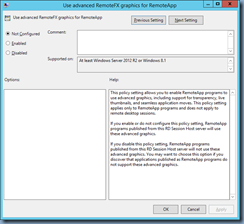 Disabling this feature corrects the problem but it creates a new problem where if the user’s desktop launching the RemoteApp does not have the left most monitor as their primary monitor: 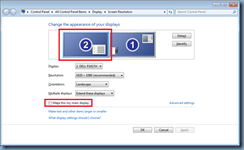 What happens with this setup for users is that they would launch the RemoteApp without any issues:

The application will work as expected but if the user minimizes it:

Then attempts to restore the RemoteApp, the application will attempt to be restored on the left non-primary monitor and display a black screen that the user cannot interact with:

This appears to only be a display issue because the user can right-click on the application in the task bar, close it, relaunch the application and not lose any work. What’s strange is that this does not appear to affect applications that are not maximized meaning if the application was launched and then minimized as such:

The application would restore without any issues. Another alternative workaround is to configure the left most monitor as the primary: 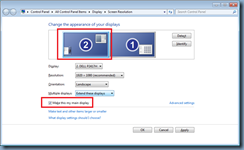 Another workaround I was able to find was to limit the amount of monitors for the RemoteApps with the Limit number of monitors configuration: 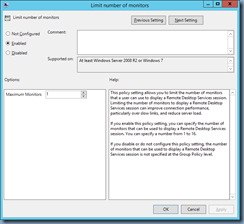 While this corrects the issue, it restricts the application to the primary monitor disallowing the user to drag the window to the left or any other monitor and this was likely going to be very annoying.

I had opened a case with Microsoft about two weeks back, which was closed because I couldn’t replicate it on my desktop (I always use my left most monitor as primary) but have been since reopened this week after figuring this out. The engineer hasn’t called me back yet but knowing the cause allowed me to find this forum post discussing the same problem on Windows 10:

I had this issue too. I found that re-enabling remotefx on session servers made the issue go away. But now window focus is messed up, when a new window pop up in a remote application it goes behind the main application until user clicks out of the app, the pop up will appear.

The environment I’m experiencing this problem uses Windows 7 as the desktop so I can confirm that this isn’t limited to Windows 10. There isn’t a resolution in the forum post so I hope to get to the bottom of this and share the resolution.

Has this been fixed? Do you know if a hotfix was released ?