Referring the following blog post I wrote a couple of months back:

VMware Horizon View 7.4.0 virtual desktops does not automatically power on after upgrade
http://terenceluk.blogspot.com/2018/02/vmware-horizon-view-740-virtual.html

… the environment I had upgraded to VMware Horizon View to 7.4.0 continued to have desktop power on policies, which required chronic weekly reboots to resolve so I ended up opening a ticket with VMware to have them review the issue. The case was eventually escalated to the engineering team and the following was the response I received:

We would like to inform you that our Product Development Team reviewed the logs and figured out that it is an issue with VcCache.

The escalated engineer told me that our options were to try a patched build that hasn’t been fully tested for production environments or wait for the next version and since there wasn’t an official release date for the next version, we opted to try the patched build.  I’ve scheduled the upgrade to go on this weekend and will update this post in a week with the results.

In addition to the desktop power on issue, the VMware engineer also mentioned that other customers have experienced refresh task and provisioning issues with 7.4.0, which this patch fixes.  For reference, the following are the details of the patched build file: 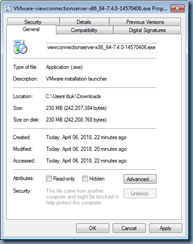 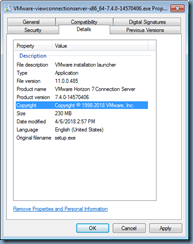 The following is the native 7.4.0 build: 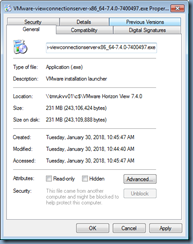 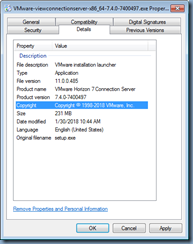