I recently ran into a strange issue with a client that had a satellite office with 4 users who use a Lenovo Windows 10 PC and VMware Horizon View client to connect back to their desktops in the main datacenter.  The satellite office is relatively new so the VMware Horizon View client installed onto the PCs were version 4.5.0 but two of the desktops recently had to be swapped out due to hardware failures and since a newer 4.6.0 client was out, I decided to go with the latest version.  Shortly after the new Lenovo PCs with the newer client were deployed, I received reports that:

I originally did not suspect this was related to VMware Horizon View so I sent my colleague out to have her check the drivers and any other Windows components worth reviewing.  A day goes by without a resolution so the issue was escalated to me and that was when I realized the only difference between the two non-working PCs and the other ones that were working was the newer VMware Horizon Client 4.6.0.9732:

Having exhausted most options that could be tried on the Windows 10 operating system, I quickly downgraded the client to 4.5.0.8090 and printing immediately functioning as expected:

I’m not completely sure there is a known bug for this client as the release notes here does not mention such an issue:

I hope this blog post will be able to help anyone who may come across this issue and in case anyone wants to compare operating version versions, below is the Windows OS on the Lenovo details: 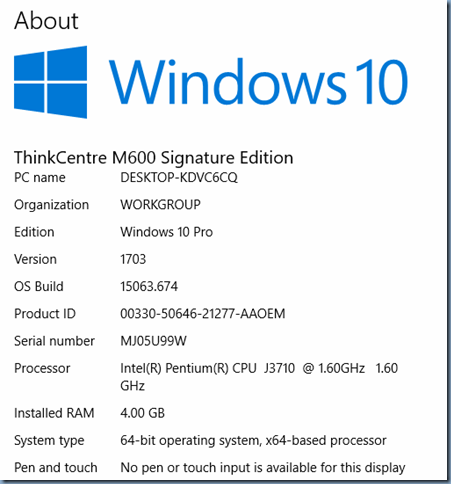 Also just ran into this with a 4.6 user. Thanks for the tip!

I contacted VMware for this issue last week and they responded that their developers were aware of it,and the issue would be corrected in a future Horizon Client release.