I recently received a call from a client who was deploying a new Citrix XenDesktop infrastructure and was able to get all the way to creating his first desktop catalog but the wizard would fail with the following error: 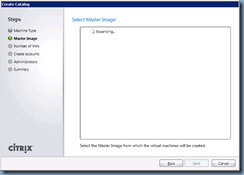 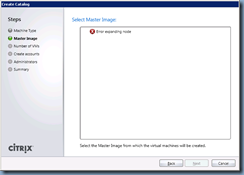 What was interesting was that he told me it would only sometimes throw this error and sometimes it wouldn’t.  There were also no errors logged in the event viewer on the Windows Server 2008 R2 DDC.

Having browsed around the server reviewing the configuration and logs for 10 minutes without any noticeable errors, I went ahead and searched for the error which brought me to this KB:

While the details in the KB wasn’t an exact match to my problem and the resolution didn’t fix my problem, it did give me a hint that this was most likely a connectivity issue to the vCenter from the DDC.  After ensuring name resolution, routes and ports were all working as it should, I realized that maybe this was a certificate issue because since there were 2 DDCs in the Citrix environment, maybe only 1 of them was working.

To make a long story short, I realized that DDC01 had the vCenter certificate stored in the Trusted People Local Computer store but DDC02 didn’t.  After getting the certificate into DDC02, the error went away.

Thanks ! You saved my day !