Attempting to migrate mailboxes from Exchange 2010 to 2016 stalls with StatusDetail: StalledDueToTarget_MailboxCapacityExceeded

You’re in the process of migrating mailboxes from Exchange 2010 to Exchange 2016 with both a live as well as an archive mailbox and while some mailboxes successfully move to the new databases, you noticed that others remains in Syncing status indefinitely: 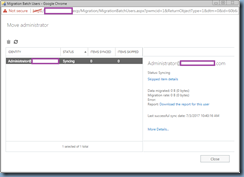 Expanding the More Details… option show the synchronization has stalled for quite some time: 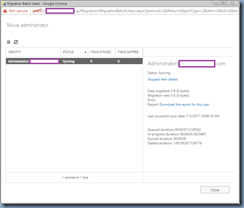 … does not provide additional information.

Reviewing the properties of the migration job and clicking on Report: Download the report for this user: 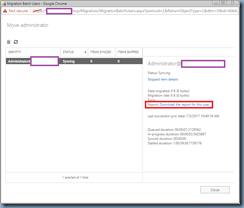 Attempting to log onto the Exchange 2016 server and adjusting the parameters MaxActiveJobsPerSourceMailbox and MaxActiveJobsPerTargetMailbox in the configuration file MSExchangeMailboxReplication.exe.config located in the directory E:\Program Files\Microsoft\Exchange Server\V15\Bin does not correct the issue: 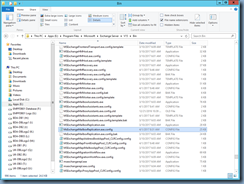 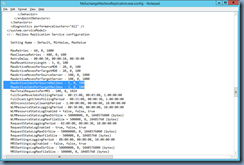 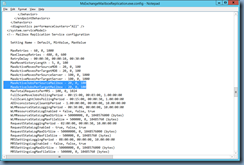 Attempting to search for the error messages:

… did not return any helpful posts and what ended up being the problem was the archive mailbox server we were using to move the archive mailboxes to.  The server’s CPU utilization wasn’t particularly high (2%), memory usage was average (90%) but the server uptime was 82 days and there were pending Windows patches asking for a reboot. Previous mailboxes that were stalled would successfully completed after the server restart: 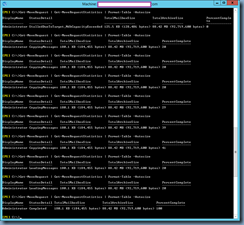 Hope this helps anyone who may encounter this issue and unable to find any useful information on the internet.

Hi Terence,
I have a similar issue like this. The coexistence environment is the same(Exchange 2010/Exchange 2016). Migration jobs don't work from GUI, but no problem with PowerShell(New-MoveRequest). May I know the CU version of this?

This environment I'm working with currently is CU5.

Hi Terence,
I may find the root cause. Would you please check all of your Exchange attribution mailboxes location? Please migrate them to Exchange 2016 in case they were in Exchange 2010. I found it works after I did that.