Attempting to add the CAS role to an Exchange 2010 mailbox server with SP3 Rollup 13 throws the error: “The installed product does not match the installation source(s)…”

You need to install the CAS (Client Access Server) role onto an existing Exchange 2010 server with SP3 Rollup 13 that has the mailbox role already installed.  You’ve downloaded Exchange 2010 SP3, unpacked it, run setup.exe:

… select the CAS role to be installed but receive the following message during the install: 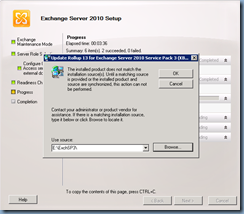 The solution to this is actually quite simple and that is to click on the Browse button and manually select the exchangeserver.msi file in the unpacked Exchange 2010 SP3 folder:

Manually selecting this file will allow the install to proceed: 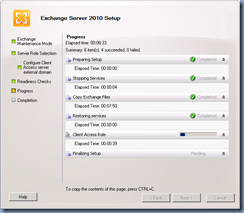 It is important to reapply the rollup update to the server once the install is complete.  In the example above, the version listed via the following cmdlet is SP3 RU13: