Before I begin, it’s important to note that I am not an expert with the SanDisk Fusion-io ioVDI product and the only exposure I’ve had was with a client who had another consulting company implement it in their VMware Horizon View 6 environment. With that out of the way, I’ve been troubleshooting issues with the VDIs ever since the the ioVDI product was upgraded from 1.0 to 2.0.  The virtual desktops would exhibit sporadic issues with various applications such as BGInfo not being able to load the customized desktop background or Silverlight web pages not loading at all.  The Silverlight web page issue isn’t as obvious so I’ll use the BGInfo as an example.  The screenshot below displays an error message when we try to manually apply the customized background:

There is not enough space on the disk. 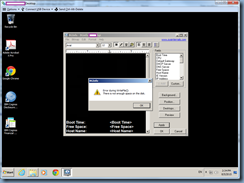 This behavior lead us to believe that it had to do with the ioVDI cache / disposable disk so we opened up a ticket to work with a support engineer and we noticed that the Non-Persistent / DisposableDisk was indeed low on space with 1.52MB free: 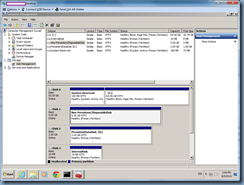 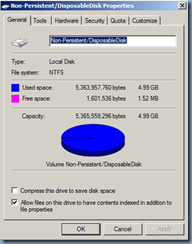 This would sort of explain why the BGInfo couldn’t load the background because the wallpaper would have consumed around 2MB of space which the disposable disk did not have.

Next, we browsed to the folder that ioVDI redirect files to:

Lassoing the folders and reviewing the properties shows that only 6.30MB of space is actually consumed: 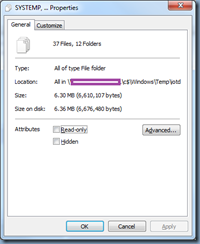 Having a feeling that perhaps there were hidden files, we went ahead and configured the folder to list all files and folders: 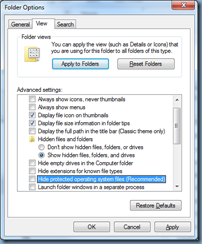 Which immediately revealed a redirected 5GB pagefile.sys file that was just as big as the 5GB disposable disk: 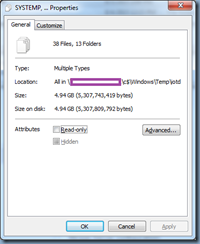 The page file size was expected because the virtual machine was configured with 6GB of memory. 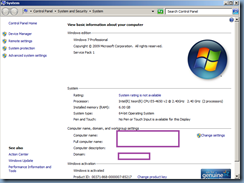 I’m currently still waiting for the ioVDI support engineer to call me back with a recommendation whether to increase the drive space or perhaps do not redirect the page file and will update this post when I get a firm answer.

I received confirmation from the support engineer that the pagefile.sys should be redirected to the disposable disk as it is by design.  The case is currently being escalated to the engineering group because there have been several customers with the same issue.  One of the another engineer I worked with is was able to locate a command to disable the redirection of this file:

I haven’t tried this yet because I wanted to wait for engineering to get back to us on a better resolution.

We didn’t get an update from the other support engineer who’s trying to escalate the case so I went ahead and made the change to disable the redirect of the pagefile via the command above, rebooted the VDI and immediately noticed that all the sporadic out of memory, out of disk space error messages and other problems we had went away.  The VDI also feels a lot faster.  Here is a screenshot what the command prompt output looks like when executed directly on the VDI: