I ran into an interesting problem tonight while troubleshooting an Edge server issue where the services won’t start with the event ID 19005 error logged in the Lync Server logs:

LS Audio/Video Authentication service could not be started. 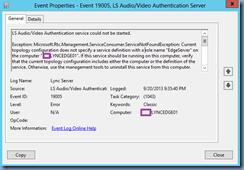 What’s interesting was that this Edge server was fully operational just a few days ago.  In hindsight, the error above should have given the enough information to identify the root cause but instead of realizing what was the issue, I went down another path which I will go through now (sorry but if you want, you can just scroll down for the solution) in case anyone ends up going down the same route before finding this post.

My first thought was to launch the Lync Server Deployment Wizard to review the deployment status and what surprised me was the following: 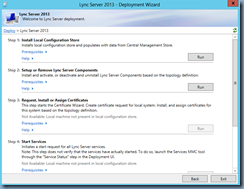 Administrators who have deployed Lync would recognize this as a screen that we would see if Lync wasn’t installed at all on this Edge server.  My next step was to re-export the CS configuration file then run Step 1: Install Local Configuration Store to see if it would complete: 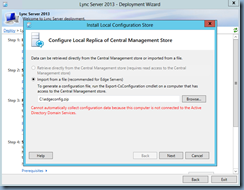 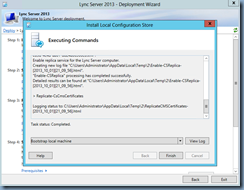 … the green check marks I was looking for beside the steps were still missing: 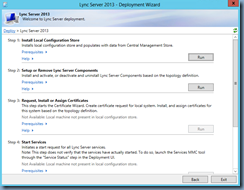 … so the next step I ran was Step 2: Setup or Remove Lync Server Components and that’s when I noticed the verbose output indicating this server was not found in the topology and went on to uninstall all of the Lync Edge services.  Once the process completed, I was left looking at the same screenshot as the one above.

Reviewing the other errors in the event logs continuously indicate that the Lync Edge server was not a part of the topology:

Current topology configuration either does not include this machine or the definition for this service. 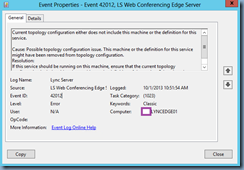 The service failed to start. 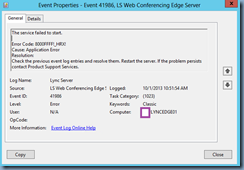 Exception: Microsoft.Rtc.Management.Deployment.UnknownObjectException: "lyncedge01" is not a known computer in the topology. It may be raised by incomplete replication.
at Microsoft.Rtc.Management.Deployment.Core.Computer.GetComputer(DeploymentContext context, Topology topology, Fqdn fqdn, Boolean bCurrentVersionOnly)
at Microsoft.Rtc.Internal.Tools.Bootstrapper.Bootstrapper.ReplicateCMSCertificates().
Cause: The service running on the local machine is not configured correctly or cannot use the certificate.
Resolution:
Ensure that local services are properly setup.  Run Enable-CSComputer Power Shell command on the local machine to validate the configuration. 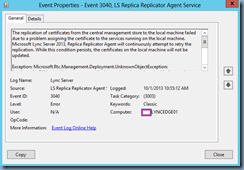 The last error appeared to indicate that there might be a certificate error so I checked the stores to ensure the root and intermediate certificates were in the correct stores.

After combing through all of the settings, reviewing the Topology Builder where it clearly has the Edge server defined, I tried running the Enable-CSComputer power shell command on the Edge server and saw this output:

WARNING: Detailed results can be found at

computer in the topology. It may be raised by incomplete replication.

I don’t know why it took me this long to realize this but I realized I was actually staring at the issue all along and it was indicated in this line:

computer in the topology. It may be raised by incomplete replication.

What I realized was that all the certificate references and how this server wasn’t in the topology was because this server is being referenced as the NetBIOS name while, as we all know, in Lync it is referenced by the FQDN.  So I go on and browse the Edge server’s computer properties: 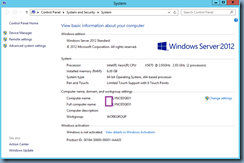 Then open up the DNS Suffix and NetBIOS Computer Name setting and long behold, the suffix that represents the domain’s FQDN was missing: 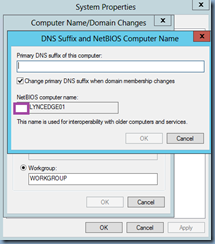 So I proceed to fill it in and restart the computer: 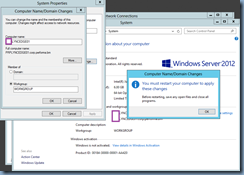 Once the computer was restarted, I was able to successfully reinstall the Lync Edge services and start them up.  This was definitely a strange issue as I’m not even sure why the suffix went missing to begin with.  Funny how I was staring at the root cause and went completely a different root.  Perhaps I need to cut back on those 90 hour work weeks I’ve been having.

It is better to double check your code before you install it.

Thanks Terence! I had the exact same problem except mine only occurred after I uninstalled/reinstalled and this fixed it.

Thanks Terrence. Nicely written article! I was having this same problem primarily because the edge server is not domain-joined. Typically, the domain suffix takes care of this.

I had the same issue.. only the DNS suffix was there but the NetBios name needed to be refreshed. After removing both NetBios and DNS, I rebooted and entered them again. Then restarted and the install worked.

Thanks for the detailed article. Saved me a ton of time!

Thanks Terrence, excellent work with the article. It too saved us a lot of time finding the issue. Cheers mate!