Creating a “Home Folder” in Active Directory at the root of a Windows file server throws the error: “The home folder could not be created because: The network name cannot be found.”

It’s been awhile since I’ve had to do a greenfield deployment of Active Directory as most of the projects I’ve done in the past few years involve established networks so simple setup principals I used to remember back when I originally studied for my MCSE are faint in memory.  With this in mind, I was recently asked to create a few new users for a client and as I went into the Profile tab to enter in a home folder share, I was quickly presented with the following error message when I clicked the OK button:

The home folder could not be created because: The network name cannot be found.

Having not done this for awhile, I started reviewing the profile path setting as shown here: 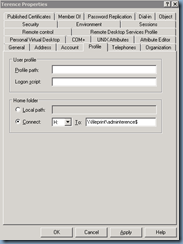 Note: Excuse the actual adminterence$ name I used in the example above because what I actually used was %username% but because I forgot to do a screenshot, I used the one I had.

Don’t ask me why but this standard was in there before I got here so I was just simply copying the settings.  What I noticed was that I could actually manually create the share folder first, assign the proper permissions then configure it in the screen above and I would be able to proceed.

After thinking it through for a bit, I had a hunch that perhaps specifying a folder that’s in the root of the server may be my problem so for my next attempt, I specified the following path: 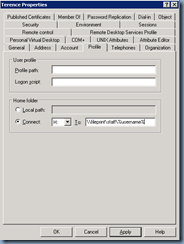 Once I put in a top level folder, the configuration would proceed without any error messages.  I haven’t had a chance to test whether it was because:

1. It was a top level folder

… so it could be either or.  I don’t recall ever creating shares at the top level in the past which would explain why I’ve never come across this problem.  Hope this serves to provide a quick answer for anyone who might experience the same problem.  I typically create a folder named users or userprofiles and share that folder out.

Great stuff again. Thanks for making time to write these articles. You will be my number one resource, Looking forward to more articles
SharePoint online Training