One of the scripts I've used a lot over the past few years is the Test-ExchangeServerHealth.ps1 PowerShell health check script written by Paul Cunningham.  The red, yellow and green colour coded report generated by this script allows me to easily review the status of critical Exchange services on devices with small viewing space such as a smartphone.  If you are unfamiliar with this script, further details about the script can be found in the following links:

This script could be scheduled to automatically run via the Task Scheduler and this post serves to provide the configuration for the action which sometimes can be difficult to find.  Note that I won’t go into the details of creating the scheduled task as that could be found in one of my previous posts here:

The following is the syntax required to configure the action:

… and had accounts created for the users in the organization but noticed that some users receive the following web page when attempting to access the portal via IFD and ADFS:

The resource you are looking for might have been removed, had its name changed, or is temporarily unavailable.

You’ve confirmed that the user is enabled in CRM:

You proceed to navigate to the ADFS sign page that the CRM deployment uses and sign in as the user: 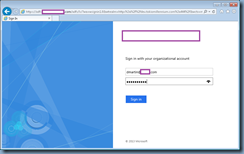 What you quickly notice is that the following error is displayed when you sign in with the user’s credentials:

A Microsoft Dynamics CRM user record does not exist with the specified domain name and user ID. 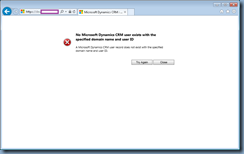 Note that I am by no means an expert with CRM but I made a “best effort” attempt at troubleshooting the issue and was able to identify the following:

What ended up enabling me to correct this problem was to:

This appears to force CRM to map the user’s Active Directory identity to a CRM user record.  Below are a few screenshots that show the process: 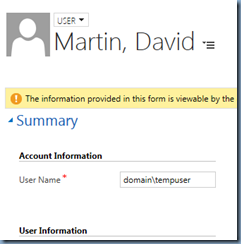 Once the above has been saved and closed, reopen the account properties and change the User Name back to the correct identity.

Determining whether servers and desktops are protected from WannaCrypt / WannaCry Ransomware

It has been a busy week for most of my clients after the media published articles indicating that major organizations such as the NHS were infected by the WannaCry ransomware cryptoworm. Although a patch for this vulnerability was released as early as March 2017, some of my clients either had a portion of their servers unpatched or all of them since I’ve found it is not uncommon for companies to miss months of patching due to various business related reasons.  There has been a lot of information made available since last week but I’ve found that there are bits and pieces of important ones scattered on different sites so I wanted to write this post to include the information provided by Microsoft that I found useful when assisting clients to determine whether they are protected.

The first available patch Microsoft made available for this vulnerability was released in March 2017 known as Security Update MS17-010, SMBv1 and information about this could be found at the following Security TechCenter bulletin:

Installing the patch above would protect the cryptoworm from spreading to other servers via the legacy SMBv1 protocol and an alternative workaround would be to disable SMBv1 all together which Microsoft recommends to do if the customer was running Windows Vista or later.

All version of Windows are affected by the vulnerability and the following table provides the KBs required to protect the operating system:

Determining whether patch is installed

**Note that if the KB after the find is case sensitive so use capital letters.

If the patches are not installed then no output would be written as shown in the following screenshot:

If the patch is found then the following output will be displayed:

As mentioned in the Versions of Windows Affected section, the operating system is protected as long as one of the patches is installed so it is always advisable to install the latest rollup package rather than any of the previous rollups or security patch only.  However, if downloading a 200MB+ rollup package for a Windows Server 2012 operating system:

… is a problem for whatever reason then the alternative option is to download the security patch only which is around 37MB in size:

If downloading and installing the appropriate patch is not an option then disabling SMBv1 could be an interim solution.  The following are instructions for how to disable SMBv1:

The following are links to articles that outline the impact of disabling SMBv1:

You’re attempting to log into VMware Horizon View where 2 factor authentication is enabled and you use your email address or UPN as the User name: 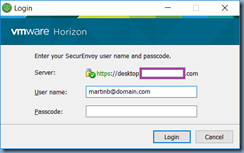 However, you notice that you are unable to change the Domain field as the drop down box is greyed out and locked: 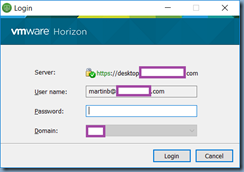 I am unsure as to whether this problem is specific to the SecurEnvoy 2 factor authentication software this environment had but a way to get around this is to use the format domain\username for the User name field instead: 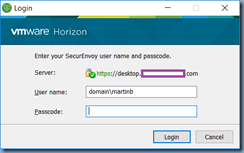 Using this login format will unlock the domain drop down box so you can now select the domain: 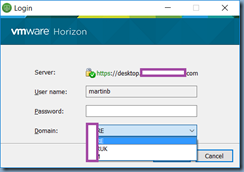 Posted by Terence Luk at 3:06 PM No comments: 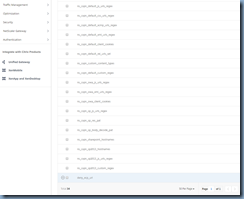 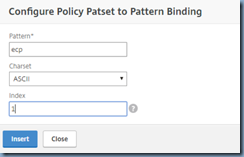 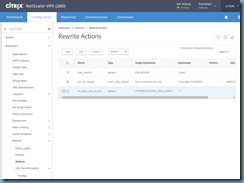 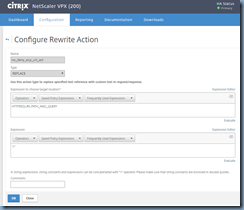 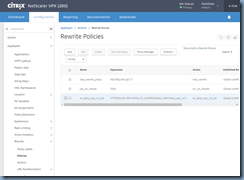 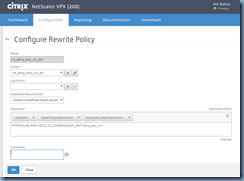 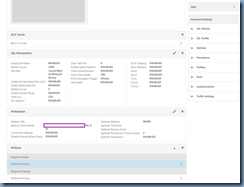 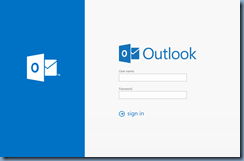 You attempt to run the Test-ExchangeServerHealth.ps1 health check script found at the following Microsoft TechCenter:

… but notice that the report generated is indicating that the mail flow test is failing for your Exchange servers:

Executing the cmdlet interactively in the console displays the following error:

Manually executing the Test-Mailflow cmdlet on the servers complete without any issues.

One of the reasons why this error would be thrown is if you have entered the FQDN that represents your load balanced CAS servers for the PowerShell (Default Web Site) Internal URL field: 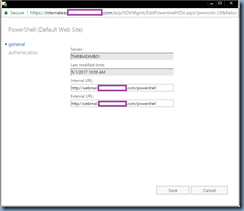 Changing the field as shown in the screenshot above causes the script to connect to the virtual name to execute PowerShell cmdlets, which is what causes the following error which complains that the the virtual name does not map to a computer account in Active Directory to be thrown:

Mail flow test: WARNING: Connecting to remote server webmail.contoso.com failed with the following error message
: WinRM cannot
process the request. The following error occurred while using Kerberos authentication: Cannot find the computer
webmail.contoso.com. Verify that the computer exists on the network and that the name provided is spelled
correctly.

To correct the issue, change the Internal URL field back to the internal FQDN name of the server: 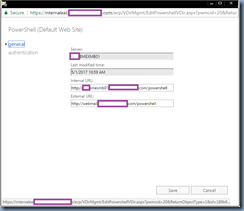