After having all the issues with distributed network switches and Nexus 1000v switches and vCenter / Virtual Center’s database on a SQL instance that’s on a different server, I decided to recommend to the client that we proceed with installing SQL onto the vCenter server’s operating system and use that to host the database. Since we’ve moved to this configuration, we noticed that the VirtualCenter and VirtualCenter Management Webservices services would never start upon a reboot:

I went ahead to review the logs and found the following:

The description for Event ID 1000 from source VMware VirtualCenter Server cannot be found. Either the component that raises this event is not installed on your local computer or the installation is corrupted. You can install or repair the component on the local computer.

If the event originated on another computer, the display information had to be saved with the event.

The following information was included with the event: 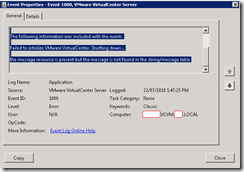 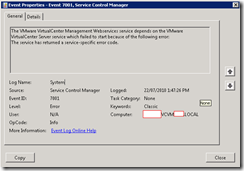 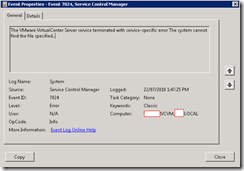 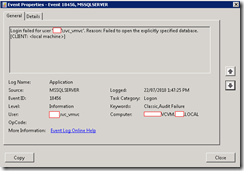 (For instructions, see the next blog: http://terenceluk.blogspot.com/2010/07/addressing-virtualcenter-service-not.html)

I went ahead to reboot the server after I modified the registry and added the dependencies only to find that the problem still continued to happen. I’m unsure as to why but I decided to try and change the service from Automatic: 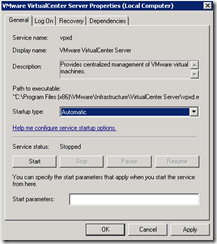 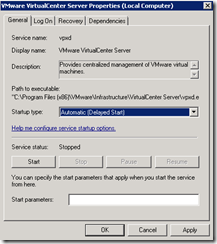 Once I completed this and restarted the server, the services began to start properly. There was one caveat though, and it was the VirtualCenter service starting properly 2 to 3 minutes after the server is reachable. In case the person reading this doesn’t know, the reason for this is because setting a service to Automatic (Delayed Start) means that it will wait till all of the other Automatic services are completed started before it will start and the Service Control manager also sets the priority of the initial thread for these delayed services to THREAD_PRIORITY_LOWEST.

I have just started having the same problem with my vCentre 4.1 server.. I had seen it a while a go, but it seems to come and go..