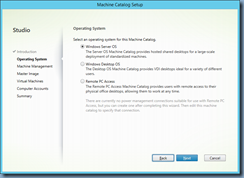 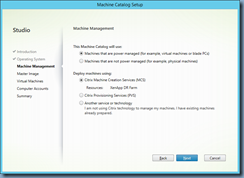 Completing the wizard starts the process of cloning the XenApp application server’s master image but you notice that the process does not complete and you are presented with the following error:

An error occurred while preparing the image. 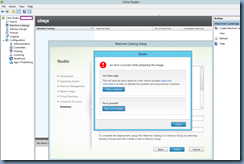 Citrix.Console.Models.Exceptions.ProvisioningTaskException An error occurred while preparing the image.

InternalErrorMessage : Either the account is not granted sufficient privilege or disabled or username/password is incorrect 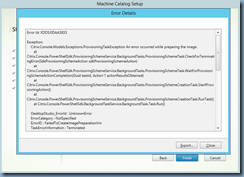 This problem is most likely caused by missing permissions for the service account used by Citrix Studio to connect and execute operations in your vSphere environment. In this particular case, the missing permission was the Advanced permission under Configuration: 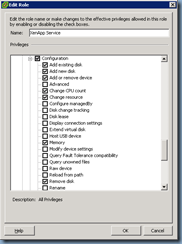 The cloning and deployment of the XenApp application server completed successfully once the permission was granted: 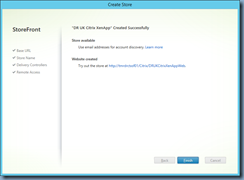 Posted by Terence Luk at 9:18 AM No comments:

I recently ran into an issue that had me troubleshooting a NetScaler VPX issue for a good two weeks and while there’s an actual VMware and Citrix KB article about the issue, I hope that this blog post will reach out to anyone who actually follows my blog or twitter so that they are aware of it.

I was informed by a client that the NetScaler HA Pair I deployed over a year ago that the Citrix portal published behind it no longer worked and when I logged on, I noticed that I was unable to log into the management GUI of the NetScaler.  What I would basically get is the login page and once I type in the credentials and attempt to log in, I would see a white page indicating it’s loading and eventually fail after a very long time.

Attempting to ping the device would either flat out no longer respond or exhibit drop packets shown in the following screenshot: 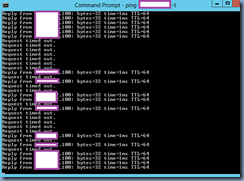 Logging onto the console and attempting to ping other servers on the same subnet would fail but pinging the NetScaler VPX’s own IP address would work.  A quick restart of the NetScaler would return the appliance to what appear to be a regular state for various window of time but will be short lived.

The NetScaler VPX in the environment is version is 10.5 build 54.9.nc:

After troubleshooting over the week, I finally found the following VMware article:

… and the following Citrix article:

What I found out shortly after asking was that the ESXi hosts were recently updated to ESXi 5.1 Update 3 which supersedes the Patch 5 build that VMware and Citrix indicates would cause the NetScaler to lose its network connectivity.

I can confirm that the workaround as outlined in the Citrix KB as well as updating the appliance to 10.5 build 55.8 resolves the issue.

Posted by Terence Luk at 8:14 AM No comments:

Presenting PowerPoint presentation from Lync 2013 fails with: “Some presenting features are unavailable due to server connectivity issues.”

I’ve noticed that I get asked at least once every few months to look at why sharing PowerPoint presentations in a new Lync Server 2013 deployment with Office Web Apps would fail with the error message:

Some presenting features are unavailable due to server connectivity issues. 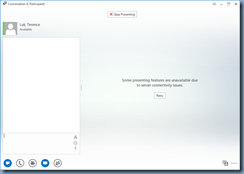 If you try to share the same PowerPoint .pptx presentation, you would notice that the file was successfully loaded as indicated by the following message:

This File is Already in the Meeting 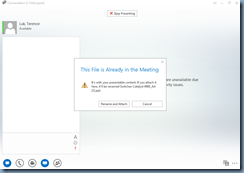 You’ve also confirmed that lal the Lync Server services have been started:

What I’ve noticed is that 9 out of the 10 times I get called for this is because .NET Framework 3.5 Features is not installed on the server: 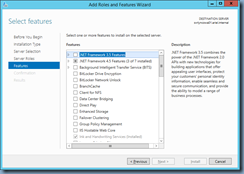 This component is required for the Office Web Apps server when it is installed on either a Windows Server 2012 R1 or R2 server: 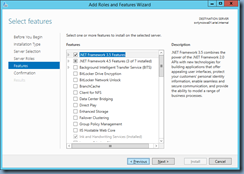 Hope this helps anyone who may run into this issue as there isn’t really a specific error logged in the events that points to this.

I’ve recently been asked by a client whether it was possible to set the Lync 2013 client’s Show Menu Bar option as enabled by default:

… and as any IT administrator would respond, my answer was yes because it is most likely configured via a registry key.  While I figured there is a registry key for this setting, the first approach I took was actually downloading the Office 2013 admx templates to see if the policy definitions for the user or computer configuration contained these settings.  What I found was that the policy definitions for the Lync 2013 client contained very little configuration settings so I set off to locate the setting in the registry.

Before I begin, note that the client I am using in this example is 32-bit: 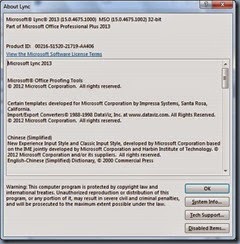 With the above out of the way, all the registry settings for configuring the client is actually located at the following path:

… and the registry setting for the Show Menu Bar is the REG_BINARY AlwaysShowMenu:

To following 0000 00 value disables the setting: 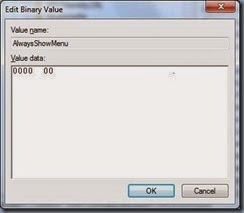 The following 0000 01 value enables the setting: 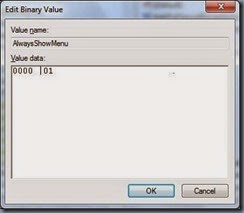 Another question that the client asked was whether the Minimize to the notification area instead of the task bar configuration could be enabled by default: 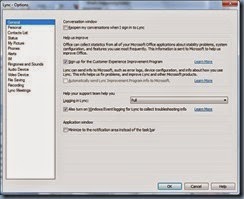 … and this could also be configured via the following registry key in the same path as above:

The value of 0 is to disable and 1 is to enable:

I won’t go into the other configuration settings but most of them could be located in the same registry key folder as well.

Posted by Terence Luk at 8:02 AM No comments:

I’ve been reminded several times by my colleagues over the last two years that I never wrote a blog post demonstrating how to federate Lync Server 2013 with Google Talk and my usual response has always been that there are plenty of posts out there already but because I had to recently configure this for a client, I figure I’ll write the post just so I can say I’ve done it.

Before I begin, please note that Google is going to discontinue XMPP and their Google Hangouts does not support XMPP federation. Adding users on Google Chat has been problematic over the past year as Google has been trying to block domains that SPAM users. What all this basically means is that your mileage will vary and the amount of time Lync 2013 users would be able to IM Google Talk users will be limited. The following blog post by Matt Landis does a good job of explaining this:

With that out of the way, the TechNet documentation that I will be following can be found here:

Begin by launching the Lync Server 2013 Topology Builder and loading your organization’s topology: 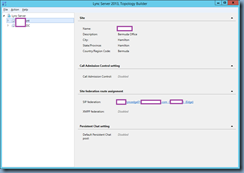 Then open the properties of your Edge server and ensure that Enable XMPP federation for this Edge pool (port 5269) is enabled: 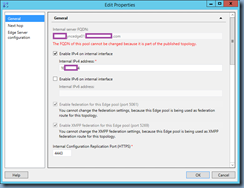 Next, edit the properties of your Lync server and enable the Enable XMPP federation setting: 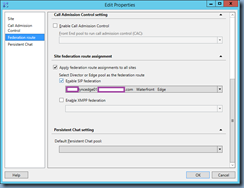 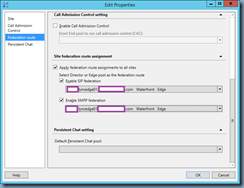 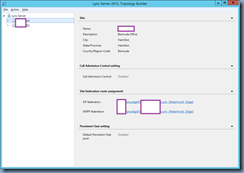 Proceed by publishing the topology: 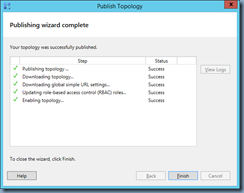 Continue by launching the Lync Server Management Shell and execute the following cmdlet:

The cmdlet above basically configures the following in the XMPP Federated Partners section in the Lync Server 2013 Control Panel: 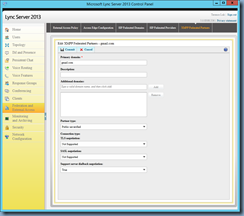 Create a public SRV record in your public DNS SIP domain with the following properties: 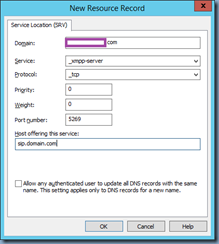 If the configuration setting Enable XMPP federation for this Edge pool (port 5269) was not enabled and you had to enable it during Step #1, log onto the Edge server, launch the Lync Server 2013 Deployment Wizard and run the Setup or Remove Lync Server Components to install the Lync Server XMPP Translating Gateway Proxy: 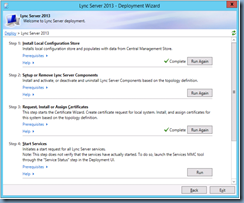 Once the Lync Server XMPP Translating Gateway Proxy has been installed, you should see the service listed in the services console: 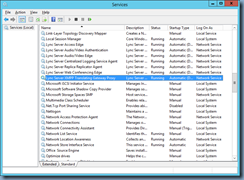 Ensure that there is a certificate assigned to the XmppServer service by launching Request, Install or Assign Certificates:

As noted in the following TechNet article:

… ensure that TCP 5269 is allowed through the firewall and into the Edge server: 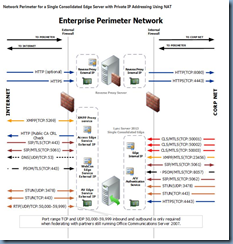 With the above steps completed, you should now be able to communicate with Google Talk users via Lync 2013.

There have been times in the past where I’ve had to set up a quick and dirty way to ping a set of servers for a period of time to determine whether any packets are lost and while there are quite a few tools available to download, I’ve preferred to use the following simple batch file:

Simply paste the commands into Notepad and save the file as a .bat file.  The log generated will display only entries of failures similar to the following output:

Posted by Terence Luk at 8:22 AM No comments:

I was recently asked by a small client to provide them with an inventory of the application installations on their 30 or so desktops for documentation purposes.  The environment did not have any management software that could pull this information so I ended up using a combination of the sc command and psinfo to retrieve the information and thought that I’d write this blog post so I could reference this method in the future.

The first step is to start the remote registry service on the remote desktop with the sc command as such:

You can use a spreadsheet and populate rows with the desktop names and concatenate the sc \\ + desktopName + start remoteregistry then execute the commands in bulk as such:

With the remote registry service enabled, proceed and download the psinfo.exe tool from:

Then execute the command to pipe the installed applications on the target computer to a text file as such:

As with starting the remote registry service, use a spreadsheet and create a list of commands as such:

The output of the text file should look similar to the following: